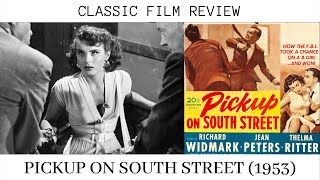 
What he doesn't know is that the lady is under observation by agents, who are waiting to see where she delivers the contents of her purse to…

Now the pickpocket victim Candy an immaculate Jean Peters…can’t make the drop and has to break the bad news to her communist boyfriend, the agents have their sting literally snatched away from them, and McCoy finds himself with a piece of microfilm containing some kind of secret formula that both the law and the communists will do anything to get.

Now the brilliant and (controversial for the time) thing that Widmarks McCoy doesn’t do… is become an American hero and team up with the feds to fight the reds… nope..he continually keeps the cops chasing their tails whilst he attempts to extort $25,000 from the communists in exchange for their microfilm…

.
Steven at Reel Classic Film Reviews discusses this classic film noir from 1953 and how it is one of Sam Fuller's and Richard Widmark's greatest acheivements.
.
Checkout these other classic film reviews:

.
For more movie related goodness, such as film reviews, blu ray collection videos, unboxing's, and top ten follow Reel Classic Film Reviews on Social...
.
Instagram: https://www.instagram.com/reelclassicfilmreviews/
Facebook: https://www.facebook.com/reelclassicfilmreviews/
.
.
#pickuponsouthstreet #moviereview #filmnoir #review #film #cinema #classicfilm #reelclassicfilmreviews #samuelfuller #50scinema #filmreview #classicfilmreview #richardwidmark
.
.
.
Copyright Disclaimer Under Section 107 of the Copyright Act 1976, allowance is made for "fair use" for purposes such as criticism, comment, news reporting, teaching, scholarship, and research. Fair use is a use permitted by copyright statute that might otherwise be infringing. Non-profit, educational or personal use tips the balance in favor of fair use. No copyright infringement intended. 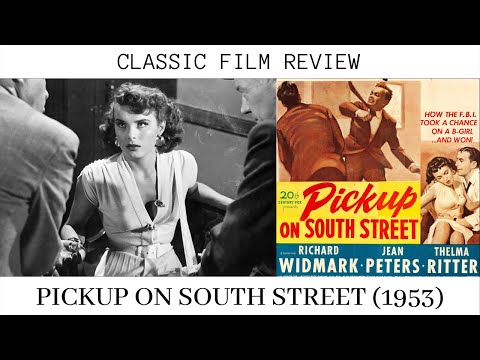